It seems a bit late to be talking about New Years doesn't it? Well it usually takes me a little while to catch up to my life and I've only just realised that it's been three weeks since the start of 2011! I decided last year that I was giving up resolutions as I rarely followed through.

This year I am going to make some "resolutions" of sorts but lay them out as goals for sometime in the future rather than this year. 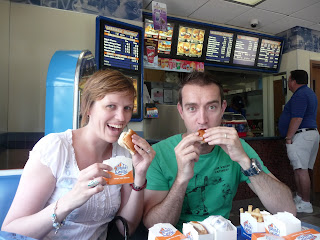 A and I in the US trying some of the local cuisine!
This is a tricky one as I love food and I hate exercise! The change will have to be in my lifestyle, not my diet. The answer is not in joining a gym, but finding fun ways to get my heart rate up without slogging away on a treadmill... bleh! We have two beautiful little puppies who need daily walks so that should be a good start :) 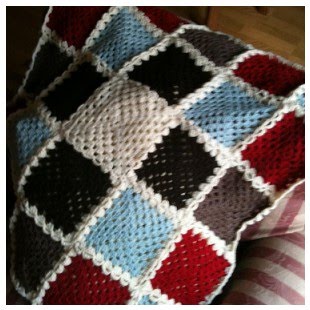 The blanket I crocheted last year
I've been so much more creative this past year than the five before it. However, there's more I want to explore and try this year! I would love to pick up the tatting which Nana gave to me for Christmas. I also want to start making more for my market stalls which I am proud to sell. 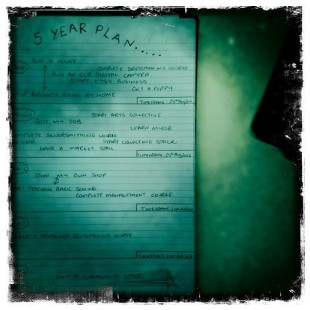 Another tricky undertaking as I am so unsure of where to start with this one. Last year I wrote a 5 year plan and I'm pretty happy with how things are going so far. I have fulfilled three of my six goals for last year and in all honesty, that was all I was hoping for. A house has been bought, puppies have been adopted and my sewing room is in operation. Surprisingly enough, a goal from the second year has also been achieved so I deserve extra marks for having a market stall... now to get to that elusive "Quit my job" goal.
Posted by kathchown at 7:00 AM

Promote Your Page Too

kathchown
I am a small business owner, crafter, mum to two rascally puppies and wife to my best friend. I make wood-cut story book and pop culture brooches which I sell in various boutiques across Australia. I am also getting back into markets so you might see me out and about in Brisbane soon!