What a successful weekend I've had! Despite some severe machine trouble over tha last week, I managed to get enough stock made and ready for the Davies Park Markets at West End on Saturday AND the Marky Markets on Boundary Street as well.

The Davies Park gig was last minute as I was only called on Friday afternoon to see if I could fill a spot. I arrived at 5am (eek!) on Saturday morning and we were able to trade until 1pm until the rain forced us to pack up. It was still a really great environment and the girls I was next to were really friendly. 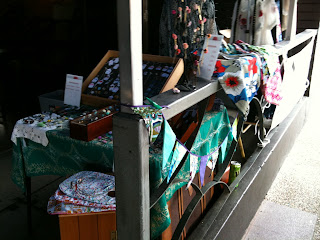 Side view of my stall at Marky's
Then I did my regular Marky Markets and while the day was miserable, a lot of people were still out and about in West End. 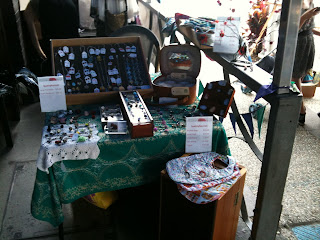 See you all next Saturday at Davies Park again :)
Posted by kathchown at 5:51 PM

Promote Your Page Too

kathchown
I am a small business owner, crafter, mum to two rascally puppies and wife to my best friend. I make wood-cut story book and pop culture brooches which I sell in various boutiques across Australia. I am also getting back into markets so you might see me out and about in Brisbane soon!